Yoshinojo Fujima (a.k.a. Rika Lin), is a shin-nisei, a part of postwar Japanese American diaspora, an interdisciplinary performing artist, choreographer, and a Grandmaster in Fujima style Japanese classical dance. She has performed in venues such as the Museum of Contemporary Art, Chicago Cultural Center, Jay Pritzker Pavilion, as well as within community and educational outreach programs. An active member of Asian Improv aRts Midwest, she is continuously crafting contemporary awareness with identity and tradition. In 2017 she received a 3Arts Make a Wave award and was also a 2017 Links Hall Artistic Associate Curatorial Resident, where she began the Beyond the Box series, which champions female performers. She recently concluded her 2017 Chicago Dancemakers Forum Lab Artist year with her performance at the MCA SHareOUT! Minifestival with Asobi: Playing within Time. She continued her queries as a High Concept Lab Sponsored Artist in spring 2018, and at the residency at Ragdale Foundation in the beginning of 2019. Her choreography, which stems from traditional pedagogy, lulls people into believing what at first appears to be a traditional Japanese dance but is in fact a transgression filled with subtle expressions of humor and protest. Yoshinojo blends traditional aesthetics with contemporary music and movement practices to make dance pieces relevant with 21st century ideas of roles and identity. Throughout the Spring of 2019, she presented iterations of Suji: Lines of Tradition for performances at the Chicago International Puppet Theater Festival, Links Hall 40th Anniversary LinkSirkus, and for her third Beyond the Box presentation collaborating with puppet artist Tom Lee. She was awarded the John D. and Susan P. Diekman fellowship for the Djerassi Resident Artists Program in Autumn of 2019. In March of 2020, she performed in Kyoto, Japan at UrbanGuild as part of the MushiHime Festival just before the pandemic came into full force. She was also awarded the Master Apprentice Ethnic Folk Arts Grant, and has been adapting the pedagogy of traditional Japanese Classical dance with her mentor/teacher. Currently she is pursuing projects as a High Concept Labs Fellow (2021), the main project concept is Kurokami: E {m} urge. 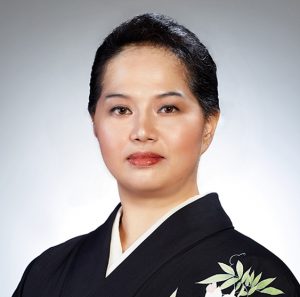